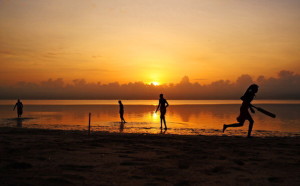 Players in the Maasai Warriors cricket team are silhouetted as they take part in a practice session at the beach in Mombasa on March 6, 2012. The team is made up of Maasai warriors from the Laikipia region of Kenya. The players are aiming to be role models in their communities where they are actively campaigning against Female Genital Mutilation, early childhood marriages and are fighting for the rights of women. Through playing and being involved in cricket activities in regional communities they are trying to promote healthier lifestyles and spreading awareness about HIV/AIDS amongst tribal youth. The team have been invited to play in the Last Man Stands Twenty20 Championship in Cape Town, South Africa.
AFP PHOTO/Carl de Souza (Photo credit should read CARL DE SOUZA/AFP/Getty Images)